Another snow storm is headed our way. In fact, it is supposed to hit us early evening, go until afternoon Thursday, and bring between 8-12 inches of snow. I’m hoping for a lot less though. I’m over doing farm chores in the snow and I have a wedding to photograph on Saturday. The snow is just a nusance at this point. I’m so ready for spring!

Last friday I scheduled to have UPS deliver our new chicken coop. I got a call from the freight service asking if a tractor trailer would be able to make it up our driveway. Anyone who has been to our farm knows that the answer is no way! I had no idea what to say, and was trying to imagine how big these boxes had to be that they needed to be delivered on a tractor trailer. After I practically worked myself into a panic, worrying that it wasn’t going to be delivered at all, the man asked if we had a pick up truck that could just meet the delivery man at the bottom of our driveway. We do, so I scheduled the delivery for Monday and had Kevin drive my SUV to work so I could use the truck. When the time came to meet the delivery man I put the kids in the truck, Breckin brought his measuring tape just in case we needed it, and waited at the bottom of the driveway. Breckin bounced up and down in the seat every time a truck drove by. I tried to explain to him that it was going to be a BIG truck and his jaw nearly hit the floor when he saw the huge UPS 18 wheeler pull up. I desperately wanted take a picture as our boxes were loaded off this huge truck into the back of our little F150, but I thought the delivery man would think I was crazy. I did  snap a few pictures once we got  back to the house though… I still don’t understand why it had to be delivered by such a huge truck. I can’t wait to start assembling it! 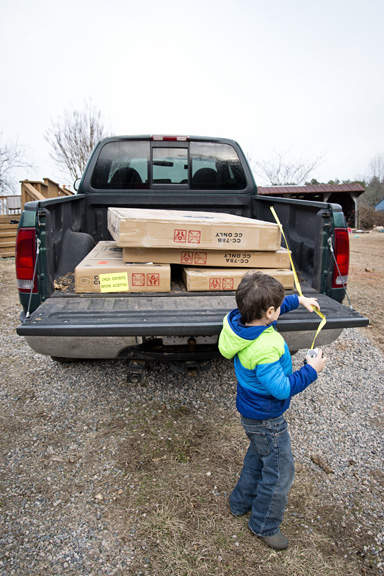 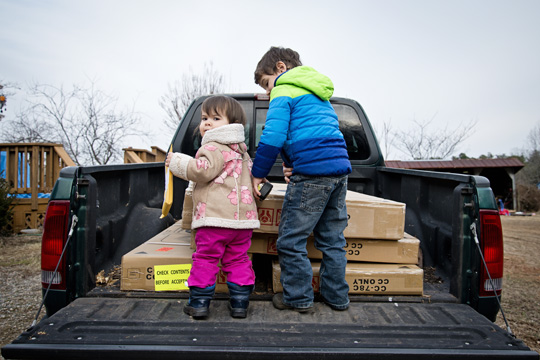 The girls have 5 more weeks to go in their pregnancies. Now is the time that we start preparing them. They will have their CDT shots and dewormer in the next week and we will start to set up their birthing area soon. They should also really start to show before too long. Both have a little bit of a tummy and waddle, but 75% of the growth happens in the last 4 weeks of the pregnancy, so they should really start to “fill out” over the coming weeks. I promise to post pictures as they really start to get big.

On a final note, the My Courthouse Market has been canceled for tonight due to the weather…. did I mention that I’m over winter yet?